Shortly after we arrived in the Western Cape of South Africa, we were told that we may be able to see whales during our stay.  The Southern Right Whale spends summer feeding near Antarctica and migrates north in winter for breeding.  September marks the end of winter in South Africa, and we have seen signs of spring all around.

A couple of days after arriving in Yzerfontein, South Africa (the beautiful seaside town that is our home for the month of September), my wife and daughter were enjoying time on the beach, when they spotted something near the town’s dock.  At first, my wife thought it was a rock, but on closer inspection, they saw that it was a whale.  They sped home to gather my son and me, and the four of us went to the dock.  We spent the next forty-five minutes transfixed by the whales.  There were three whales within fifty meters of the dock, and they appeared to be two large adults and one small young whale.  We could see another whale about three hundred meters away.  They seemed to float effortlessly, rising and falling with the waves.  Their mouths came out of the water, and they occasionally fluttered their fins and tails.  It was a sight to behold!

We have seen whales on two other occasions.  Once was while at the West Coast National Park, a beautiful place set on the coast just north of Yzerforntein.  And the second time was from the beach while walking the dogs. A storm was brewing, the winds were strong, and the seas rough. Just off shore — no more than 200 meters — we spotted a whale easily floating in the water. It seemed to take no mind to the storm that was leaving us damp and windblown. And we didn’t mind the cold and damp conditions as we watched this majestic creature.

In addition to whales, I also hoped to spot some seals while in South Africa. We traveled to Robben Island (more about this experience in another blog post), which is named for the seals in the waters near Cape Town. Robben is the Dutch word for seal. As our boat approached the island, we saw eight or ten seals sunning on rocks. It was a nice sight, but I really was hoping to see seals in a more natural setting.

Yesterday, while my daughter and I were walking the dog on the beach, we looked behind us, and we saw a seal on the shore. We stood still for several minutes watching the seal. With Pella the dog securely on the leash, we walked closer to get a better view. As we approached slowly, the seal looked at us for a while before walking into the surf. It started swimming in the water just a few feet offshore. As we walked back home, the seal swam parallel to the shore in the same direction we walked. What a gift in this wonderful town! 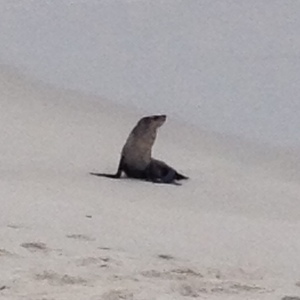