In my last blog post, I wrote about our visit to the American cemetery near Omaha Beach, Normandy. We also visited British and German cemeteries in Normandy. The cemeteries are different in important ways that helped me realize the losses experienced by people from different sides of the conflict in World War II. 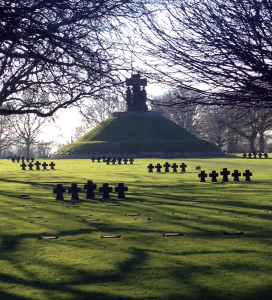 At the German cemetery at La Cambe, the remains of 21,000 German personnel are interred. The American cemetery at Omaha Beach is visited by more than one million people each year, and there were scores of people there during our visit. People walked among the American graves, filled the visitors center, and took part in organized tours. During our time at the German cemetery, however, there were only two other people present, and quiet filled the air.

As you enter the German cemetery, you can leaf through a book of names of those buried on the grounds. Near the end of the book are printed words that could apply to Germans, Americans, Brits, or nearly any other people:

Darkly rises the mound over the grave of the soldiers.
Darkly stands God’s command over the dead of the war.
Yet brightly glows the sky above the towering crosses,
More brightly still shines their comfort: The final word is God’s. 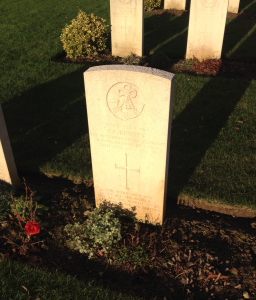 Second, while grave markers in the American cemetery all are white and include minimal embellishment, tombstones in British cemeteries include individual epitaphs chosen by surviving family members. Walking through the graves, I read many moving testimonies. One marker says, “You were only one to all the world but all the world to us. Mam, Dad, Sister, Brother.”

Another grave marker was especially poignant. The tombstone for Serjeant S. Barber, Royal Artillery, who died on August 2, 1944, at age 30, includes words from his mother. It says,
Dear Son of Ann Barber. His father killed in action 1918 is buried at Conde. Remembered.

2 thoughts on “British and German Cemeteries in Normandy”