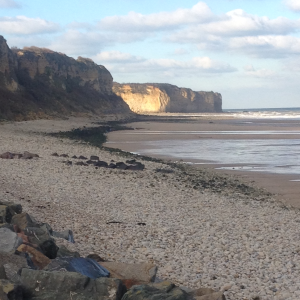 One of the highlights of our time in Normandy was visiting the beaches where the D-Day invasion began on June 6, 1944. While walking on Omaha Beach, the scene of so many American casualties, I was struck by the incongruity of what I saw there seventy years later. The beach was calm, with a few clouds in the sky, and people enjoying their time on the shore flying kites, walking dogs, and playing with children. 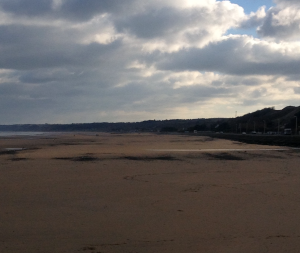 A dear family friend, Zedekiah Cassel, had been a young American soldier landing on the beach at Normandy. Zeddie told a few stories about his time in Normandy, and I wondered what he would have thought to see people frolicking on the same beach where he nearly lost his life. Would he be pleased or upset, concerned or happy?

To enhance my experience in Normandy, I read Stephen Ambrose’s book, D-Day, June 6, 1944: The Climactic Battle of World War II. Near the end of his book, Ambrose quotes General Eisenhower who visited Omaha Beach on June 6, 1964, to mark D-Day plus twenty years. Speaking with Walter Cronkite, Eisenhower looked over the scene and said,

You see these people out here swimming and sailing their little pleasure boats and taking advantage of the nice weather and the lovely beach, Walter, and it is almost unreal to look at it today and remember what it was. But it’s a wonderful thing to remember what those fellows twenty years ago were fighting for and sacrificing for, what they did to preserve our way of life. Not to conquer any territory, not for any ambitions of their own. But to make sure that Hitler could not destroy freedom in the world. 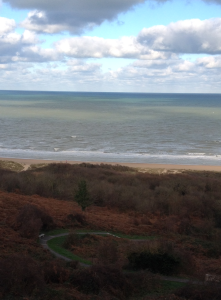 Looking down at Omaha Beach from American Cemetery

I suppose the setting in Normandy today, with its calm beaches and tranquility, is what the soldiers would have hoped for. Standing there on the quiet beach and later looking down from the cliffs, I was struck deeply by what they must have faced that day — and how fortunate I am today.