One of our goals in going on our family sabbatical is to leave behind — at least for a while — the routines and distractions that so often tend to fill our lives.

Staying in hostels these past couple of weeks, we have had no access to television and only limited Internet. This has provided us many chances to play games with one another, something we rarely do at home. (One exception to this is the almost daily Yahtzee games we play while visiting with my In-laws. My mother-in-law is known as the Yahtzee Queen because of her many years of success! I aspire to such greatness, but I am not even close to being a Yahtzee Prince.)

As I’m writing this blog entry, I have just been eliminated from a family Jenga tournament. The tower just crashed as I was pulling out a block.

The other three members of our family are still competing for the coveted title of Jenga Champion. They each are pulling blocks from the tower and hoping it won’t crash down.

We also have a deck of Uno cards with us at all times. Yesterday, we played several games of Uno on a grassy overlook at Machu Picchu. Last summer, we enjoyed playing Uno on the Eiffel Tower and the Chunnel train.

It’s curious that we have travelled thousands of miles to play games with one another, but it is a wonderful aspect of our traveling together.

Now, I’ll begin to plot my strategy for the next Jenga tournament… 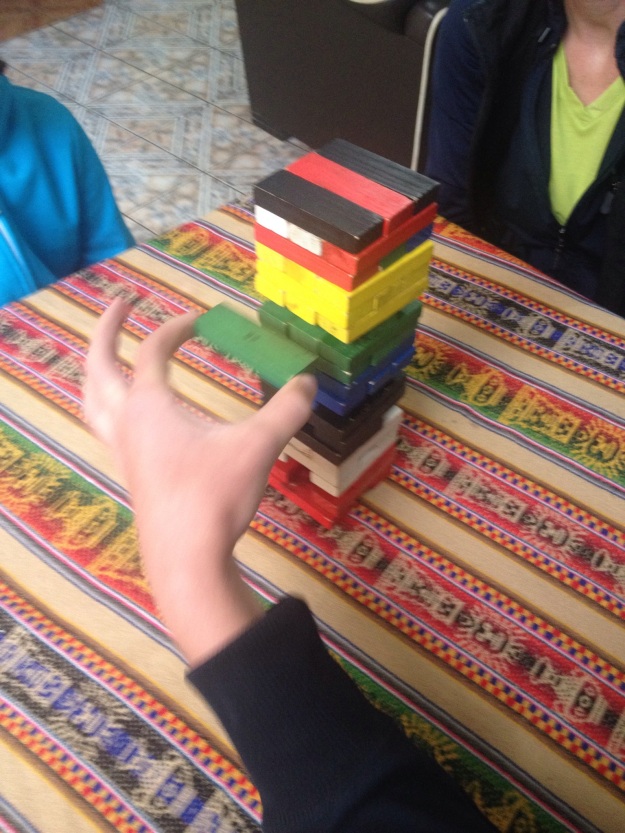