Have you ever done anything offensive to others? Probably so, and I’m guessing that likely it was unintentional. Or, perhaps, in a flourish or a fluster, you did something you knew would offend others. 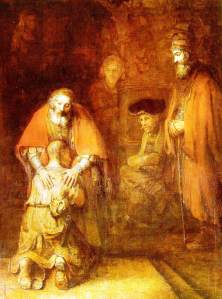 Rembrandt, “The Return of the Prodigal Son”

In the next three weeks, our church will consider three people whose behavior was deeply offensive. In our worship, we will focus on one of Jesus’ best known stories (or parables) found in the Gospel of Luke, Chapter 15, which commonly is called “The Prodigal Son.” A better title would be “Lost Sons” because the story provides details about a father’s two sons, both of whom are lost: the younger son who leaves home and squanders his early inheritance and the older son who stays home and simmers in anger.

Perhaps an even better title would be “The Offensive Family” because all three characters – younger son, older son, and father – act in ways that are deeply offensive to the norms of their day.

The younger son brashly demands his inheritance, in effect wishing that his father is dead. The Greek verb is an imperative, which means the son says, “Give me the money” with nothing close to a “please” included. No respectable son would make such an offensive demand.

The older son, upon hearing the party given to celebrate his brother’s return home, acts in offensive ways when he refuses to enter the party and confronts his father in view of neighbors and hired workers.

And, perhaps the most offensive behavior of all is displayed by the father. Rather than treating his wayward son as others expected, which was to consider him dead and separated from family and community, the father runs to meet the younger son upon his return home and gives him the best things possible – embrace, kiss, robe, ring, shoes, and party. Surely, any neighbors would have been aghast at the father’s behavior. And, when the older son refuses to enter the celebration, the father goes out to him and pleads with him to come join the party.

Fred Craddock, noted Biblical scholar and preacher, refers to the “offense of grace” that Jesus provides in telling this story. How offensive – and how wonderful – that a parent is not held back by social expectations but instead goes after both sons in love.

The next three Sundays in our worship, we will remember each of these characters. I hope you will come – and prepare to be offended!